Championship pairs have been held over due to members having covid.

This year was a special year for the Cullen Shield as it was played shortly after the passing of Gerald Cullen, who has been a staunch supporter of Nambour Bowls Club and many other local organisations over the years. He will be missed by many and we would like to express our condolences to Gerald’s family and friends.

The 2021 Cullen Shield series was scheduled for September through October this year to take advantage of the warmer weather. Unfortunately, this time of year also means there is a greater possibility of storms. Luckily, only one week was lost to weather, and the finals were played one week later in November.

Sides and teams from Maroochydore, Palmwoods, Woombye, Mooloolaba, Kawana, Glasshouse, Coolum, Yandina and Nambour participated this year making a total of 12 sides. Each side consists of two teams of four players. The sides were randomly assigned positions in the red and blue sections.

The competition consists of five round robin weeks, then a finals evening in which all sides participate. The points accumulated during the round robin games determine the final ladder position of the sides in the red and blue sections. On the finals night, the top side in the red section plays against the top side in the blue section to decide first and second overall placings. All the other sides in the red section play their opposite numbers in the blue section to battle for third and fourth places.

While the finals placings are based on the combined side scores, each night prizes are awarded to the winning and runner-up teams of four players.

Click the button below for a copy of the Complete Conditions of Play.

The Finals were played on 4th November as follows (based on final accumulated points in blue/red divisions):

Final for 1st and 2nd place:

The top two sides, Maroochy Magic and Maroochy Mongrelss battled for the top two places based on their great performances in the five week round-robin series, while all the other sides competed for third and fourth places. Congratulations to all the players who took part on this night, but a special thanks to those who competed in previous rounds but were unable to play in the finals.

Many thanks again to our sponsors A Cullen & Son, Nambour Peugeot Representatives, who have sponsored this and many other events and clubs over the years.

Bede Connolly of the Maroochy Magic side was awarded the Ken Ahlstrom Trophy for nomination as the best player in the final between Maroochy Magic and Maroochy Mongrels. Congratulations Bede.

26 teams of four Ladies participated in this year’s Fiesta in glorious spring conditions, playing 4 games of 10 ends. As usual morning tea and a two course lunch were enjoyed by all.

Click the appropriate year for a summary of the year Championships (PDF):

The 2022 season commenced Saturday 5th February. The competition is again sponsored by Bowlers’ Paradise and this is much appreciated by all participants. Further sponsorship is to be organised by SUPPORT2U, a local community business providing disability support services throughout the Hinterland including the Sunshine Coast, Noosa and Cooloola areas.

This year, 10 Ladies’ and 14 Men’s sides are participating, giving an 8 round competition played over the 8 weeks ending 26th March, one round being played each Saturday.

As the competition progresses, please click on the button below to download or view the Points Table, which will show the points and prize money accumulated each week.

The button below gives you access to the Ladies’ and Men’s Points Tables at the end of Round 8. Please note that the men’s results are sorted by total points and prize money rather than within section.

Congratulations to all sides for contributing to a great series, but especially to the Nambour  Men and Mapleton Ladies sides for emphatic wins.

To view or download the Conditions of Play, the Draw or a Results Sheet for this year’s competition, click the appropriate button below.

To view or download printable scorecards for Men & Ladies in PDF or JPG form, click the appropriate button below. Our thanks to Wayne Knetter of Woombye for developing these scorecards and making them available for us to use.

Previous years, since its inception in 2016, Nambour Bowls Club has entered Men’s and Ladies’ teams in the Great Bowls Challenge (known as the Gr8) and has been successful most years. This year, however, Nambour players have opted to concentrate on the Bowlers Paradise Hinterland Local League.

The competition usually runs for 6 – 8 weeks during February and March each year.

Nambour has teams in Divisions 1, 2 and 7 in this year’s Sunshine Coast District pennants.

Congratulations to our Nambour players who  played in the Division 7 final at Woombye on Saturday 19th September at 1pm. They met the winner of the playoff between Club Maroochy and Tewantin-Noosa which was won by Club Maroochy.

In the final Nambour and Club Maroochy won one rink each, but Nambour went down on aggregate by a margin of one after leading up until the last end of the final.

Congratulations to the Nambour Finals players shown in the picture.

Thanks also to Lee Lavers, Terry Hall, Jack Ingham and Eric Sprules who played in the side and  helped to get the side into top place.

For complete results please visit the SCDMBA website using the button below. 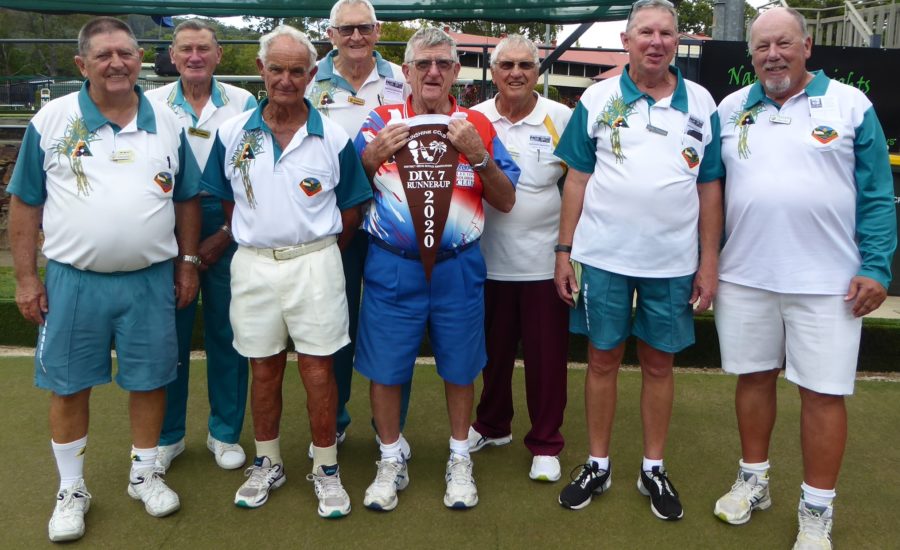 Nambour has teams in Divisions 1 and 3 in this year’s Sunshine Coast District pennants.